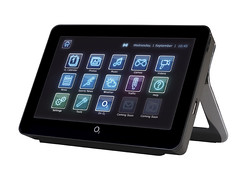 I grabbed one of the O2 Jogglers last week while they were on special offer at £49.99. The Joggler is a rebranded version of the OpenPeak OpenFrame and is touted by O2 as a “replacement for your fridge door” it is intended to be a sort of home messaging hub with calendar, weather, news headlines, streaming radio, photo viewer, music player and 50 free text message per month. Physically it looks like a fairly standard 7″ digital photo frame but underneath it hides a lot more. Powered by a 1.3GHz Z520 Atom CPU and with 512Mb RAM, 1Gb storage, WiFi and wired ethernet, 800×480 capacitive touch screen, audio out and USB it has a lot more potential than either the default O2 or OpenPeak software offers.

With the possibilities such hardware offers O2 really are doing themselves a disservice by crippling it with the rubbish default software, it’s no wonder it got such rotten reviews when launched last year at £149.99. Fortunately it is very hackable. It’s a doddle to enable telnet so that you can install extra apps using the default OS. Someone has even made a script called “Pimp My Joggler” to automatically install many of the OpenPeak apps, streaming of BBC TV channels, games and more, although it does install a lot of rubbish so you might want to stick to doing it manually.

As it uses an EFI bootloader booting other operating systems on it is also relatively straightforward and due to the amount of people who have got one of these in their hands since the £49.99 offer the hacking community around it has really taken off in the last couple of weeks. There are people working on various alternate OS options including Linux, Android, MER and MeeGo.

I’ve put the Ubuntu 9.10 Netbook Edition on mine using this image which has support for the touchscreen, WiFi and sound (with a couple of tweaks required to get the sound working). It’s just a case of writing the image to a suitably sized USB device (I used an 8Gb SDHC card in a USB adapter) and turning the Joggler on with it inserted in the USB socket, it will then boot from the USB device leaving the default OS untouched. The Joggler only has the one USB socket so a hub will be required to connect a mouse and keyboard.

Initially I had to log in at the console (login: joggler, password: joggler) and type startx to get X running but strangely once I had fixed the sound it automatically boots straight to the Ubuntu NE desktop, not sure why that would be the case but that is all that was changed.

To fix the sound you need to rename the file /lib/modules/2.6.31.6/kernel/drivers/acpi/processor.ko (eg. to processor.ko.old) and comment out the last line of /etc/modprobe.d/alsa-base.conf and add options snd-hda-intel model=basic to the bottom of the file. Reboot and sound should work.

The next thing I did was install the Google Chome browser which really flies on this hardware. The ChromeTouch extension is a very useful addition, allowing you to scroll around page by simply dragging your finger around the screen just as you would on an iPhone.

I then added flash support, MP3 playback etc. by installing the “Ubuntu Restricted Extras” package and also installed the CellWriter package for its on screen keyboard.

So far I’m very impressed with it, the speed once booted is very reasonable and certainly good enough for my intended use as a bedside media center. I just need to get another USB pen drive so I can have the SD card back for my camera.

It will be interesting to see how things progress now there are a lot of these out there, I’m particularly interested in seeing Android running on it properly, so far it boots and the touchscreen works but WiFi doesn’t work yet and the graphics are slow.

Update: Looks like the Ubuntu USB image I used has been updated already. Seems there are some sound fixes in there so I’ll have to give it a try and see if it fixes the problem I’ve been having getting Spotify to work under Wine. With the original version the sound has been working perfectly for me with all Linux apps without any of the noise others have mentioned but I’ve been having trouble getting sound in Spotify working. It loads and browses OK but when I try to play anything it gives a quick burst of static and then stops (update: a complete power off seemed to solve this!).

One thought on “Hacking the O2 Joggler”